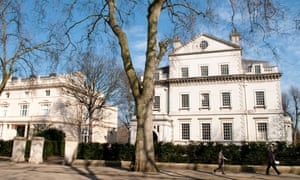 The super-rich have taken out 185 £5m-plus mortgages over the past year to take advantage of historically low interest rates and buy expensive luxury properties in London.

Members of the global elite signed up for the loans in the year to the end of September, according to figures released by the Financial Conduct Authority following a freedom of information request.

The average value of the mortgages was £9.7m, according to the figures obtained by Boodle Hatfield, a law firm that specialises in advising the wealthy. Their total value was £1.8bn, an increase of £200m on the previous year.

Estate agents and lawyers said they expected the number of high-value mortgages to increase further as the super-rich begin a spending-spree on luxury UK homes after Boris Johnson’s general election victory. Jeremy Corbyn had promised to “go after” the UK’s wealthy elite – including the petrochemicals tycoon, Jim Ratcliffe, and the Sports Direct owner, Mike Ashley – if the Labour party won.

One European family bought a house in central London for £65m as a direct result of the election, and estate agents reported further huge “superprime” property transactions in the last two weeks. A Chelsea-based buying agent said a US client was buying a £50m home and a Swiss buyer was close to buying another for £20m.

Henry Pryor, an independent luxury property buying agent, said the wealthy benefit from being able to borrow significant sums of money at very cheap rates. “If you want to borrow £100,000 then you must expect to pay between 2% and 3%, but if you want to borrow £5m then the rate drops for some customers to less than 1%,” he said. “If you’ve got £5m then you’d be potty not to borrow the same again to buy a house and put the cash to work to expand your business or to invest in something else, so long as property prices hold up.

“One of the significant advantages of property as an asset class is that you’ve always been able to borrow against it. Unlike stocks and shares you can magnify your gains [and losses] by only putting down a small proportion of the price in actual cash and borrowing the rest. With interest rates on the floor it makes leveraged deals extremely common, with 90% of the deals I’ve done in 2019 utilising some degree of financing.”

Pryor said central bank governors stating that interest rates were likely to stay very low for years would probably keep property prices inflated for the foreseeable future. “The irony is that as a result the very richest will continue to borrow despite not needing to and those who need to will find it harder to do so,” he said.

Saskia Arthur, a partner at Boodle Hatfield, said: “The number of high-value mortgages suggests that both buyers and banks remain confident in superprime property in the capital as a long-term investment. Overall the market has weathered Brexit insecurity and London will always remain an attractive destination for HNWs [high net worth individuals] to live.

“Wealthy individuals who had put off buying due to uncertainty about the market are deciding to act now in order to take advantage of current prices and often because there is a sterling discount. These buyers often take a long-term view of the market and appear to be of the opinion that prime properties will in the long-term retain their value in the years to come.”

Despite talk of a “Boris bounce” after the election result, UK house price growth is expected to remain subdued in 2020. The Halifax predicts rises limited to between 1% and 3%, with the market held back by young buyers struggling to afford deposits. The Royal Institution of Chartered Surveyors (Rics) said it expected transaction levels to be flat, with prices edging up by 2%, and the property website Rightmove is also pencilling in a rise of 2%.

… will these define the 2020s? This has been a turbulent decade across the world – protest, austerity, mass migration. The Guardian has been in every corner of the globe, reporting with tenacity, rigour and authority on the most critical events of our lifetimes. At a time when factual information is both scarcer and more essential than ever, we believe that each of us deserves access to accurate reporting with integrity at its heart.

We have upheld our editorial independence in the face of the disintegration of traditional media – with social platforms giving rise to misinformation, the seemingly unstoppable rise of big tech and independent voices being squashed by commercial ownership. The Guardian’s independence means we have the freedom to set our own agenda and voice our own opinions. Our journalism is free from commercial and political bias – never influenced by billionaire owners or shareholders. This makes us different. It means we can challenge the powerful without fear and give a voice to those less heard.

None of this would have been possible without our readers’ generosity – your financial support has meant we can keep investigating, disentangling and interrogating. It has protected our independence, which has never been so critical. We are so grateful.

More people than ever before are reading and supporting our journalism, in more than 180 countries around the world. And this is only possible because we made a different choice: to keep our reporting open for all, regardless of where they live or what they can afford to pay.

As we end 2019 and enter a new decade, we hope you will consider offering us your support. We need this so we can keep delivering quality journalism that’s open and independent. And that is here for the long term. Every reader contribution, however big or small, is so valuable.