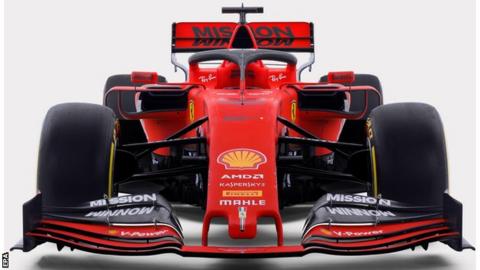 Ferrari have unveiled the car they hope will end a decade-long Formula 1 title drought in 2019.

Ferrari lost out to Mercedes in 2018 despite having a faster car at least as many times as their rivals, after a series of errors by Sebastian Vettel and the team.

New team principal Mattia Binotto said the new car was “a development of last year’s, not a revolution”.

He added the team had tried to “raise the bar and reach another level”.

Vettel is joined in the team by Charles Leclerc, in his second F1 season.

“I am looking forward to this year. The team is on the right path and hopefully we can continue improving,” said Vettel.

Leclerc, promoted after an impressive debut season for the Sauber team, said: “It is a very proud day for me. I’m not nervous. I think it is more of an opportunity for me to be alongside Sebastian, a four-time champion, I can learn a lot. I am pretty sure it will be a strong season.”

The new car, called the SF90 to reflect Ferrari’s 90th anniversary in 2019, features a radical front wing design to meet new regulations this year, the aim of which is to allow cars to race closer together by reducing the turbulence experienced by a car running behind another.

The rearward flaps of the wing slope downwards from the centre towards the outside of the wing, with the intention of channelling air in aerodynamically advantageous ways and reducing the losses caused by the new rules.

Binotto singled out the front wing as one of the Ferrari’s most important features. The same approach has also been seen on the car of the sister Alfa Romeo team, formerly Sauber, which ran for the first time at Ferrari’s Fiorano test track on Thursday.

He added: “We tried to push very hard to be innovative. The roll hoop is very narrow and slim, the bodywork is very slim. Engine installation, packaging, a lot of effort has been done, and the final shape is the result of all this effort. We like it.”

Binotto was technical director for the last three seasons and steps up to the position of team principal following the ousting of Maurizio Arrivabene in January.

The car is scheduled to run for the first time in a short ‘shakedown’ test at Spain’s Circuit de Barcelona-Catalunya on Sunday before the start of pre-season testing at the same track on Monday.

Ferrari chief executive officer Louis Camilleri said: “Vettel remains as hungry as ever and I know he is totally devoted to achieve his and our ambitions and he knows the entire team will give him all their full-hearted support.

“Charles Leclerc – we are all tremendously excited to have him. His talent, maturity, race skill and speed was evident to all last year and we are sure great things await him in the future.

“The atmosphere in the team will be one in which serenity will prevail.”

The car features matt paint work for the first time in Ferrari’s history, following a trend in F1 started by Red Bull two years ago.

It was unveiled at Ferrari’s Maranello headquarters in a glitzy ceremony that drew heavily on Ferrari’s history and standing as the most famous team in motorsport.